All About The Keys by Kenneth Weene 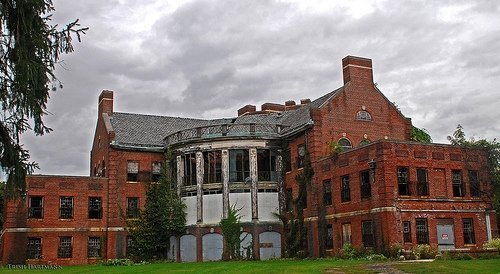 “It’s all about the keys.” I was told that when I first went to work in a state hospital. I soon learned what she meant.

First, what she didn’t mean was that the patients, without keys, were locked in. Perhaps on some of the more secure wards, but in the buildings where I worked they were free to come and go. A metal coat hanger skillfully twisted – well really not that skillfully – would open many of the doors and almost all the window gratings.

Even those most hapless of inmates, the non-verbal autistic children who were housed in a separate ward, occasionally got free and roamed their little world. One day I happened into the building director’s office to find that doctor effectively treed on his desk while his secretary screamed helplessly and dirty, screaming children appeared to be doing a primitive dance everywhere. I called for backup, and two-by-two we escorted the children back to their dayroom. When we had finished, those of us who had done the escorting sat in an office and laughed. I have no idea what the rescued psychiatrist did, but the secretary asked to be transferred to another office.

No, the keys didn’t mean that the inmates were locked up while we were not. Nor were they of great use to us in getting about the hospital – although they were easier to carry than an untwisted coat hanger. Obviously, we could use all the same routes as the people under our charge. On a couple of nice days, when I was going to take kids for a walk on the grounds, I asked the inmates to open window grates so we could go down the fire escape and avoid walking through the smell and closeness of the dayroom, to say nothing of avoiding the intrusive and unnecessary questions of bored aides and the instructions of nurses needing to confirm their authority.

The keys were not for locks as much as they were for show. Perhaps that was why many of the staff managed to amass large rings of keys, many of which were for doors through which they would never pass. Keys were the badge of authority. It almost seemed that the more keys you had the more right you had to tell others what to do. More importantly, carrying a ring of keys meant that nobody would haphazardly tell you what to do. In a world based on power over another person’s body and mind, in a world in which sedatives could be arbitrarily administered, in which seclusion in rubber-padded rooms with ones arms securely wrapped around could be imposed at a whim, in which money – and cigarettes, which were another currency – could be given or taken by decree: in such a world the symbol that one is not subject to such capricious decisions must be carefully carried at all times.

It was certainly not that the staff were saner than the patients. Indeed, there were some staff who routinely became patients – not necessarily in our hospital. It was often a short step between carrying the keys and having none, between being the authority and being the subject.

The hospital, the asylum is not a sanctuary, for there can be no sanctuary where power is so easily wielded, where control can be so easily symbolized. My first day’s guide was correct. It was all about the keys.