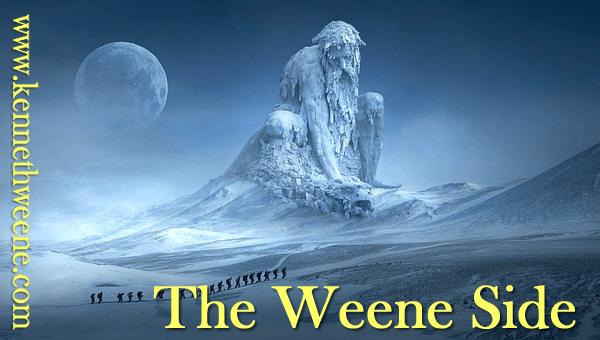 “Worthless!” The trumpeting blast of Jehovah’s voice set the bowls of manna jumping. Waves of mead swished from goblets. Two unsuspecting seraphim were knocked from their precarious perches atop great golden harps.

In the aftermath, quiet reigned in the massive hall. Every saintly and angelic eye was turned towards the All Mighty.

​“Humans,” came the only slightly less thunderous reply. “Humans. Why did I create them? Worthless!” Again the crockery jigged. One of the two seraphim, not having gained a purchase on his proper seat, again fell to the floor.

​“You could wipe them out and start over,” the tempter suggested. “A nice flood.”

​“Tried that. Lot of good it did,” the Mighty One answered.

​“Then perhaps an exodus,” suggested Mormon, clapping his wings in anticipation; “I have some planets you could buy.”

​“Same difference.” Jehovah’s brow knitted with contemplation. The quiet only broken by the soft patter of righteousness falling on the roof.

​After what seemed like the eternity it was, the Creator spoke again. “I fear that humans are irredeemable. They are infected with greed.”

“Then destroy them,” Lucifer suggested, drool flowing from the corner of his mouth and into the hissing goatee-fire of his beard.

​“Take a dump on them,” added the first Protestant as he nailed his suggestion to the great mansion’s Pearly Gate.

​“Then what would Jesus and I watch for entertainment?” God asked. “The angelic host? Boring. These guys just sit around waiting to do my will. No free will; no drama. J.C. and I like a good soap—you know, a little action.” He threw a celestial wink at Aphrodite who watched closely to make sure he didn’t cast another towards that hussy Mary.

​J.C. nudged that giggling Magdalene girl under the table.

​“Then,” the tempter suggested, “You could try creating another world. Of course the human creatures would end up the same, filled with greed. But, why not try.”

​Never one to avoid a challenge, Jehovah responded immediately, “Good idea; I will create another world with a new mankind—one without greed.”

​When the buzz had died, Thomas, always quick to raise doubts, suggested, “Instead of an entire planet you might try a trial run, you know just a small test world, to see if such a species can be created.”

​Some of the saints tried to shush Thomas, but Jehovah put his great hand on the saint’s shoulder. “Another good idea. That is what we shall do. A laboratory world.” The laugh of divine pleasure that followed the words swept through the hall. The lead cherubim, who as always stood before the heavenly choir, was so surprised by God’s merriment that she farted. The sweet smell of her wind added another layer to the growing jocularity of the Heavenly assembled.

​The Holy One was again in a good mood.  Hallelujah! Even better, He would be busy in his laboratory—with any luck for another seven days. A respite from His tantrums.

​All bowed as The Father, swirling His cape, exited the hall. Even as He strode the corridors of Heaven, Jehovah was designing this new world. It would have two races of men. They would live in two separate regions of the world—lands separated by the abyss of a great wasteland. Each land would have almost all it needed.

​But there had to be some reason for the two races to interact. God sat at His laboratory bench and contemplated the challenge. Finally, He had it. In only one country He placed the precious metals gold and silver; in the other spices grew and flourished. The two races would have to trade for these two valuables, but only for the two. “It will be a fair trade,” He thought, “a trade between equals.” Why risk war or theft when things are so even. Not like Earth with their assured mutual annihilation but a peace based on assured mutual benefit. “Perfect! Now to design a way for them to trade—just enough contact but not too much.”

​In seven days the new world of Alpha Ome had been created. After resting from His labors, Jehovah explained to His son, “This will be a show we can watch without worry. No souls lost to evil. No hearts are taken with greed. Just love. Just people being creative. And some good sex, of course. How blissful it will be.”

​The next day, the Creator allowed the hosts of heaven to see His handiwork. Paul was the first to speak. “How will they know all the rules? They must have rules.”

​Peter, as usual, disagreed. “Human nature is basically good. If they open their hearts to the Lord, they will be saved.”  Moroni was packing his bags. “Where are you going?” God asked.

​“To knock on their doors and tell them the good news,” Moroni answered.

​ “No!” Jehovah responded. “We will watch from here and let these humans discover their own goodness.”

​Melek Taus, in all his peacock finery, announced, “I will not bow before this new humanity.

​God, acknowledging that angels were incapable of learning, laughed and threw a divine cabbage at the resplendent angel’s head.

​Moses and Muhammad argued about what these new humans would be allowed to eat. When the Prophet suggested rump roast, the Law Giver was apoplectic.

“Well at least we’ve agreed no pork,” Muhammad said offering his hand in the fraternity.

​Another round of yelling and recriminations ensued. The argument grew loud enough to disturb Buddha. “Eating is an illusion,” the Enlightened Soul explained before helping himself to a plate from the buffet.

​”Enough,” God thundered. “Can’t you children ever quiet down?”

“But, but…” the host sputtered.

​“But nothing. No prophets allowed. They’ll just cut of your heads,” John joked. At least that gave Jesus the relief of a much-needed laugh

So the new world was established without law, prophecy, or sacred text. The new people lived, loved, and provided comfortable celestial viewing, but without the violence and argument over what was the will of the Almighty and what truly did not matter. The contact between the Alphas and the Omegas was limited to trade in precious metal and spices and the occasional falling into love or lust, a distinction, which in a world without religion, did not seem to matter. The route across the wasteland allowed the necessary movement of goods and lovers, but it was a long journey with little rest or water. “You keep to your side, and we’ll keep to ours,” would have been the motto if anyone thought to have one; but in a world, with proper balance, there is no need for mottos.

The Tempter was, as usual, discontent. Nothing happened to disturb God, and Satan loves drama. What good to him was a world without sturm und drang or, even worse, without war?

“Want to bet?” he asked, knowing that Jehovah was a sucker for a good wager.

“Remember Job?” he added as if the Divine One needed to have His memory jogged.

​“What kind of mischief are you up to now?” God asked. While He tried for the sternness of a rebuke, He could not keep the hint of amusement from His voice or the great orbs of His all-seeing eyes.

​“I bet the Alphas and the Omegas aren’t as peaceful as You think. I bet I can get them fighting with just one simple intervention.”

God, quite sure of His handiwork, could not resist the challenge; but He would insist on rules.

“You can’t give one something you don’t give the other. You cannot create a scarcity so that the people must fight to survive. To win the bet, the fight must come from within them not from you egging it on.” Satan offered his pitchfork in agreement. God wrapped it in His might, and the bet was settled.

​Lucifer sent two of his minions to the new Earth, one to each of the two nations. Both bore a scientific discovery, how to make the scaliate waste of the abyss into fuel that would allow the people to live better. “No scarcity,” he observed; “there is enough scaliate in that desert to last all the generations of AlphaOme forever.”

​Before the Devil’s emissaries left for AlphaOme, Lucifer checked with God. No way was he going to cheat. One eternity spent imprisoned for being a trickster was enough. How was he to know that the Boss was that serious about not coaching those first humans into sin? After all, they were dumb enough to listen to a talking snake; why give them a second thought? And how was he to know that Jehovah’s brat son would be so compassionate, would keep trying to intervene on behalf of those earthly idiots?

“So you propose making the lives of these people better?” God asked.

​“That’s right, Divine One.” Lucifer groveled at the Omnipotent’s feet — no point in riling the boss.

​“And you think this will bring out the worst in them?”

​“Yes, Majestic Ruler of the Universe.”

Even Solomon and Loki were smirking. Was Lucifer really that much of a toady or was he just putting God on? Either way, he was making an ass of himself, a fact duly recorded in Ovid’s notebooks.

​God sought the advice of Jesus, who could see no harm in Lucifer’s proposal. Even Jan Hus and Calvin agreed that there was no sin in it. Martin Luther would have been consulted except he was occupied in the crapper. At least Lao Tzu pronounced it the way to go.

Off the two angels of science went.

​Within a millennium, which is hardly a breath in the time of Heaven, the Alphas and the Omegas were at war. Both claimed the wasteland as their own. Both were determined that they and they alone should hold the power of the new technology, which meant controlling the scaliate, that necessary raw material.

As the new planet shook with battle, God raised his glass of mead to Lucifer. “Well, Beelzebub, you’ve called it this time. Humans cannot resist greed.”

​The Devil tipped his glass in return. “So, how are you going to destroy them?” he asked, hoping for a cataclysmic event.

“Destroy them?” God laughed. The rolling of His merriment swayed the stars. His breath, which even Augustine had to admit smelled of too much mead, made some of the cherubs drunk just from being in the hall. “Destroy them? Why? I think I’ll do the same as I have done with the humans of Earth — just sit back and watch. I figure they’ll make AlphaOme uninhabitable soon enough. They’ll kill themselves off. The hell with them all.”