Checkers Anyone? by Kenneth Weene 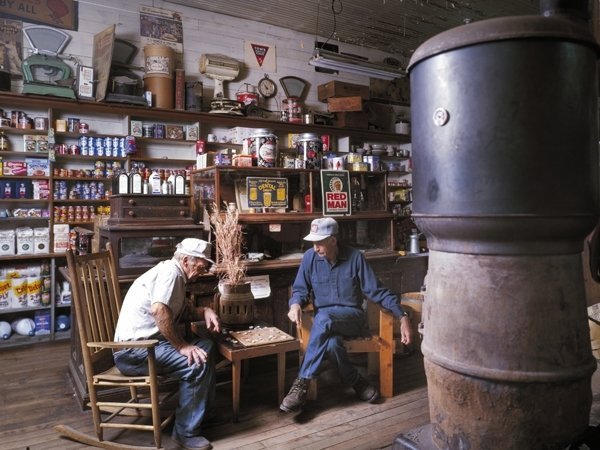 What eight-year-old boy doesn’t want to do things with his dad? When my father told me to hop in our black four-door Ford, I was happy to oblige. That we were going to the general store made it all the better. I loved roaming that store—cram packed with scythes, guns, food, ice cream, clothes, notions, even the local post office. The entire place redolent of Maine. Voices filled with flat “R”s and twang. Local folks stopped in as much to socialize as to shop.

The wood-burning stove would be cold—summer was not a time for roaring fires; but there was sure to be a checker game in progress, the board sitting atop an upturned pickle barrel similar to the one from which I would, if Dad was in the right mood, fish a crispy dill for a special treat. Checkers was a religion almost as important as the Boston Red Sox. Its devotees were the old men who gathered at Maynard’ store; its practice was simple, red and black.

My father never asked to play, nor was he ever asked;  but I loved to watch those geezers huffing and puffing their way through each game as if it were mortal combat.

While Dad and Maynard, the proprietor, worked on our order—much of which would have to come from Portland or even Boston and would arrive in perhaps a week, I wandered through that wonderland, trying as children do to soak-up everything that was being done and said.

Elvira, Maynard’s wife was talking fabrics with Hortense Clark. Usually, I would have skipped the women’s talk, but Hortense mentioned my family name. “How come Maynard lets that kike Weene order things; I wouldn’t do business with a Jew.” She spat the last word out so it hung in the air.

“What the hell did that mean?”

Instinctively, I knew it was not a question to ask aloud. That was well over sixty years ago, and I am finally ready to answer my unspoken question. My answer is not, as some might expect, about anti-Semitism, although anti-Jewish prejudice certainly underlay Hortense Clarks’s comment. Rather, it is about race or at least the American concept of race and how that concept affects our social and political discourse. It is about what has been termed by some the American dilemma, but that dilemma is not about the role of Blacks, African-Americans, Negroes, or whatever term you have learned to use when referring to people who can trace their roots back to Africa. Rather it is about how early Americans came to see themselves, how those first British-Americans came to define their world.

Perhaps a bit of history would be helpful. Well before slavery had become the mainstay of what is now the Southeast United States, it took root in the Caribbean. England had discovered sugar and the insatiable European sweet tooth demanded plantation after plantation of cane. Sugar was a backbreaking crop and labor intensive; what better way to produce it than employing the cheapest possible labor, slaves. But the Africans brought to Jamaica, the Barbados, and other islands were not agreeable to the plan or to their treatment. There were rebellions. Vulnerability to French and Spanish intrusions and to the depredations of pirates and privateers added to the sense of unease in those island colonies. Better to move lock, stock, and slave holdings to the mainland where there was comparative safety. So the Carolinas were settled. If sugarcane did not do as well in the new plantations as they had in the islands, tobacco and rice coupled with fur trade with the Indians made up the difference.

However, the plantation owners still didn’t feel that safe. The slaves were no happier with their conditions in the new setting; they still wanted freedom; and the Spanish in Florida encouraged slave rebellions. The enslaved Black population outnumbered the plantation owners and their hired hands. Then, too, displaced Native Americans brooded in the forests. There was a boding sense of danger. The solution of British troops being garrisoned in the communities was too expensive and was certainly unacceptable to the plantation owners who wanted to be their own royalty. Better to find other, poorer Europeans to share the risk, to settle the lesser lands and provide the services in the towns and villages.

The attraction of the New World to impoverished working class recruits was land. If they had none in Europe, at least in America they would now have some. So they came. Of course there was a selection process that went on. French and Spaniards were not welcome. After all, England was in almost perpetual war with those two Catholic monarchies. While Scots, Welsh, and Scots-Irish were the most welcome, there were too few of these; so other Europeans were welcome: Greeks, Albanians, Germans, and so forth. They came to find themselves an economic underclass, many indentured, often burdened with debt, and seldom able to obtain land worth the farming.

The question was how to keep these poor Europeans from forming a natural affinity with the slaves who often worked beside them all for the landed gentry. How to keep them from seeing themselves as oppressed. It was in that context that the notion of a “White Race” was born.

“Why do they call themselves the human race? Do they think somebody is going to win?” The line from a television sitcom haunts this topic. Just what do we mean by race and how do the word’s two meanings intersect?

Race in the sense of rushing or competing comes from the Norse or perhaps Old English.  Race in the sense of “people of common descent” comes from the Middle French, possibly before that from the Italian. It was originally used to describe people and other things that naturally grouped together, including wines of particular flavor, a generation, a group of people with a common occupation, or people who had a common background as a tribe.

There is no evidence that race referred to people being divided on the basis of physical differences before the late eighteenth century. In other words, those colonists—rich or poor—did not come to the Americas thinking of a “White Race.” They may have thought of Africans as different from themselves, but only in the way they may have thought the same of Russians or Slavs as not being like them or perhaps of Welsh and English being different.

It was essential to the landed gentry of the colonies to alienate the poor Europeans from the Black slaves. The easiest way to do that was to play up the sense of difference and the clearest difference was the color of skin. Hence whiteness became a political tool.

That night in Maine I lay on the grass and looked up at the stars. I could see so many of them—no light pollution to interfere. I did not know even then if I believed in God or Heaven, but I do know I believed in possibilities and the future. I looked up and like many young Americans of that day I saw a world that could be better. It did not occur to me that there were many who could only see the ground beneath them, who lived in desperate fear of things getting worse.

“Keep your eye on the prize.” What a great evocation. But for those who cannot know if their children will have enough to eat, there is no prize. They cannot look to the stars; they are far too busy watching for the pratfalls along the path. For those who are living in quiet desperation there is no possibility. For them it is the simple maxim, “Look back, the Devil may be gaining on you.”

Fear becomes anger, and anger becomes rage. The Devil is coming and has to be defeated. And if that Devil is represented by the descendents of the slaves whom their ancestors were supposed to look down on, by the Black-skinned Americans whom their culture came to call a different race, why it is clear where the rage must be directed.

For a person who sees himself as a member of the White race who lives in a terror of downward social mobility, a terror known only too well by those who are just holding on to their rung of the ladder, the mythical other, the Black, becomes a threat beyond the tolerable.

From the first gleaming of the American character this terror of the not-White was mixed in— added intentionally by those plantation owners looking for allies just in case of a slave rebellion. Once it existed towards the African slaves, it was easily displaced onto other groups, groups that at some psychological level were identified as not-White. As descendents of early French settlers migrated from Eastern Canada down into Maine and New England, they became the non-Whites. The Irish who were carried to the New World by the waves of the potato blight were often labeled “Black Irish.” Obviously, to Hortense my father was not “White,” but Elvira set her straight, albeit about just that one person, not all Jews.

Today, for most Americans, the French, Irish, and Jews have been assimilated into the class of Whiteness. African Americans are still not white. Neither are those of Hispanic background. Consider those wonderful questionnaires one is so often asked to fill out, for instance satisfaction surveys after Internet purchases and services. The classifications offered for self-identification make it clear that Hispanics are not White.

A short time ago I saw a picture of four children on the social media; they were labeled Black, Yellow, Brown, and Normal. Normal, that is the label given to the white child. Perhaps there was no intent; after all the purported message of the picture was “Everybody deserves to be treated equally!” Equally to the normal, to the White.

It is many years since I heard my father referred to as a White Jew. At the time, I suppose a part of me was happy with that distinction; it meant that my dad was accepted, that at least to some small degree we were part of the community. But he was not asked to play a game of checkers.

Years later I am not so happy. I wish I had known then what I know today. I would have spoken up. Voice cracking with youth and emotion I would have said, “My father is a person. He is honest and trustworthy. Beyond that, there should be no labels. We are Americans, and we should know better. We are the children of revolution, of the natural human drive for freedom, a goal that can never be realized while we are willing to classify ourselves as if we were talking about the flavors of wine.” I would have taken a bite of that pickle clutched in my right hand and added, “Besides he’s a great checkers player.” Yes, I would have added that.

At least now I know that it is my responsibility to say such things, to make those comments in the social media, to stand up for that idea in my life; that is the responsibility of a free person. For if we are not equally free, then freedom will no longer have meaning.

If there is a Devil who will gain on us, he will not be in the guise of those with a different shade of skin but in the guise of those who tell us that we must fear others in order to protect ourselves. We can defeat that evil spirit. The place to start? Might I suggest a game of checkers? Might I suggest that we set up that overturned pickle barrel and start to play—making sure that everyone gets a turn.