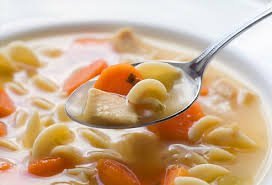 “What a pain in the ass.” Trudy put her iPhone back into her pocketbook.

It wasn’t much of an expletive or very loud, but coming from the lips of my wife it was enough to make me look up from my snack, a piece of Trudy’s latest chocolate-pecan pie, and ask, “What is, Dear?”

“Not what, who. It’s Iris…Again…now she wants me to make her some chicken soup.”

“She asked you to make her chicken soup? I know she hasn’t been feeling—“

“No, she asked me how to make chicken soup; but if I know Iris, she’s hoping I’ll make it for her.”

“Does that woman think you’re her mother?” I asked as I slipped my plate into the sink and splashed it with water.

“That girl certainly needs a mother, but I’m not applying for the job.”

I was heading into my study with my teacup still in hand. I do love to sip my tea, and the latest batch of Earl Grey was particularly good. I had send to San Francisco for a half pound only that month and had already made a significant dent in the tin.

“What am I going to do? Nothing…nothing for now. I’ll get back to her this afternoon. Maybe if I let her simmer, she’ll get the idea and do it for herself.”

Later that day, when I was poking about in the refrigerator looking for some delicious meatloaf leftover from two days before, I noticed Trudy texting.

“I can’t hear you when your head is in the refrigerator,” Trudy responded.

Well, the door being open and a couple of containers already on the counter, I didn’t say anything more until I had the meatloaf in hand.

“Who?” I asked when, having piled the other containers back into the cold, I stood at the counter taking two pieces of bread from the new loaf.

“Who, correction, whom were you texting?” Before she could answer, I remarked,

“Damn, I forgot the mayonnaise.”

I was about to plunge back into the refrigerator looking for it, but Trudy reminded me,

“Bottom shelf in the door, right side.”

How she does that I don’t know, but Trudy always knows where things are.

“Iris,” she said. “I told her to buy a chicken…and some vegetables.”

“Vegetables? That sounds a bit too general for Iris.”

I’d barely gotten the words out then there was the sound of clinking glasses. Why Trudy chose that tone for her texts I have no idea, but each time she gets one I look around for the champagne and the strawberries. Two things I love to eat with champagne: strawberries and caviar. Sadly, it’s getting terribly hard to find good caviar.

Trudy, meanwhile, had read the new text and was laughing.

“What?” I asked, always ready for a joke.

“She wants to know what kind of chicken.”

“Tell her a live one,” I offered and received a sneer in response.

“Don’t be silly; she really doesn’t know anything.”

Trudy pecked away at the tiny letters on the iPhone screen. We’re too old for thumbing, still thinking typewriter. Well, at least the keyboard’s the same.

“So?” I didn’t really want to know anything, but I hate it when Trudy dismisses me.

“I told her to buy thighs, with the skin and bones.”

“Oh.” I slathered mayo onto the bread and dropped the knife among the dirty dishes in the sink.

There was another clink, which reminded me. I opened a cabinet and pulled out a bottle of Coke.

“You haven’t fini—” Too late, Trudy didn’t get to tell me there was a half full bottle. Oh well, I’d get back to it. I poured a class and pushed that bottle into the fridge. Crescents of ice fell into my glass splashing the soda. I licked it off the web between my thumb and forefinger.

“You were right,” my wife commented.

“She didn’t know which vegetables.”

I laughed, smug in my superiority. It wasn’t until the next morning that Iris texted again.

“I’m going to the grocery store.”

“I guess she finally gave up,” Trudy observed.

“She’s figured out that I’m not on the way with a pot of soup.”

“Yep. I’m sure she was hoping.”Trudy quickly sent off a text.

“I told her to get a box of chicken stock. I figure if she’s going to try to make it, it should be edible. You don’t want Gary to suffer.”

“That would be worse.”

The thought of dogs gagging distracted me enough that my English muffin got too brown. I hate when that happens, having to throw it out and start over. “Could you make this for me?” I asked. “I’m just not with it today.”

Trudy had already plunged her hands into the sink and was washing assorted dishes and cups. She dried them carefully on a dishtowel and took the package of muffins.

“And maybe some jam.”

“Fine, I’ll have if for you in a minute or two.”I left the kitchen, turned back, and said,

“Another cup of tea.”

“Yeah, didn’t you already have some tea this morning.”

“Could you make some of that new fig tea, you know what I mean?”

I didn’t feel so bad about dirtying another cup. After all, who would mix Irish breakfast tea and figgy tea? Figgy pudding maybe. Yeah, that would be good.Another text from Iris: “What do I do now?”

Clearly, Trudy was going to have to walk Iris through the cooking process.

“She’s so needy; I feel sorry for her,” my wife answered when I asked why she was bothering.  Meanwhile Trudy was texting away, Clink.Text.Clink.Text.

“I’m not sure she understands simmer.” Text, text, text.

“Google isn’t as patient as me.”Clink

“Now what?” I asked, my words somewhat distorted by the lamb chop I was devouring.

I will admit that I’m a bit strange in some of my eating habits. One is liking cold lamb, well not really cold but room temperature, just a chop or two from the leftovers zapped for a few seconds to take the chill off. Great snack. Although late at night I add a Zantac.It being mid-afternoon, I had ignored the possible indigestion and walked about the living room a chop in each hand. Trudy didn’t answer me. She was working too furiously at the next message. Finally, she hit send.

“Oh, God,” I moaned at the thought. We’d eaten Iris’s cooking—once and that had been enough. “Let me guess, paprika.”

“That was just the beginning. Would you believe cinnamon?”

“What did you tell her?” I asked. There was still some meat in my mouth. I small piece flew onto the floor. Since I didn’t have a free hand, I made a mental note to pick it up later.

“I told her to use some salt, a little pepper, and maybe some parsley at the end. You know, to keep it simple.”

The next ping came some time later.  That was a nuisance. Trudy was buttering sheets of phyllo dough for a tray of baklava. The nuts—walnuts and pistachios are my favorites—were chopped and waiting in a bowl, from which I occasionally dipped, but only a pinch at a time. Trudy washed her hands, and read Iris’s text. I, in a bit of pique, took a handful of nuts to tide me over.

“I had to explain how to separate the liquid from the solid stuff. She has to pull the meat off the bones before she puts it back together.”

A quick glance in my direction, another into the now partly emptied bowl, and Trudy went to the cupboard.

“I guess I’ll have to chop some more nuts.” She pulled out a bag of almonds.

“These will have to do,” she muttered.

She dumped the almonds into a plastic bag, made sure it was closed, took a hammer from a drawer and pounded them into submissive smithereens. I don’t really like almonds, but I could hardly expect my wife to run to the store for more walnuts and pistachios, not if I wanted baklava for dessert.

Before my dessert was ready to pop into the oven, there was another clink. Iris again. What to do next?

I assuaged myself with a few Chinese spareribs. I keep Chinese food on hand for moments of desperation. If I eat it cold, it doesn’t get in the way of my appetite, doesn’t interfere with a good dinner.

“Skim the fat from the liquid with a spoon,” Trudy texted and went back to buttering phyllo dough. Almost immediately Trudy’s phone rang. It was Iris, doing the unthinkable, actually calling.

“What liquid,” I heard her scream over the phone.

Iris had tried to follow my wife’s instructions. How was she to know that when she strained off the liquid from the pot there was supposed to be a bowl or another pot under the colander? I mean, Trudy hadn’t told her to save the soup part of the soup. How was a neophyte to know? I watched Trudy grimace as she fought off the giggles that were already convulsing me.

Grabbing the phone from my wife’s hand, I mouthed, “I’ll take care of this.” More loudly, “Iris, honey, put Gary on.” I was taking charge.

“Hey, Gar! It’s time for us men to step up. What do say we take the little ladies out for dinner?”

“What did you have in mind?” he asked.

“A steak’s always good with me; how about you?”

I hung up with the satisfaction of having done the manly thing. That deserved a reward, and I knew there was a piece of Stilton with my name on it. I grabbed a dishtowel to wipe the red Chinese stuff off my hands and face and handed it to Trudy.

“Got some on your phone,” I commented as I headed for that cheese.

“Oh, Hon,” I said, “Could you grab me some crackers? The whole wheat ones. They’re healthier.”