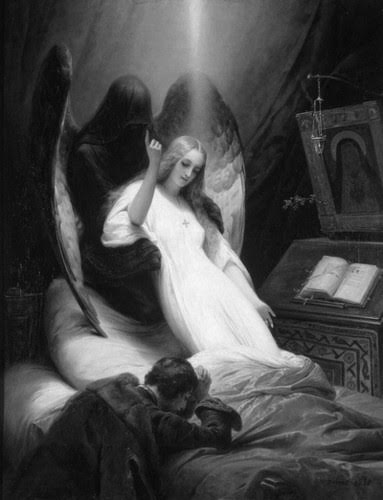 Dark Angel
By John B. Rosenman

She woke to find she was being raped by an angel.

Despite her confusion, she could see the angel clearly. Great white wings beat slowly above her attacker’s incomparably handsome face. His beauty was sublime, his body living alabaster. And he smelled (Lord!) a thousand times more divine than the most heavenly perfume she had ever known.

Then full understanding struck and she realized completely what was happening to her. She was being raped. Her cherished virginity was gone!   She felt the angel’s mighty strength as he moved within her, saw the straining splendor of his features as he approached ecstasy. Then his seed shot forth. Fragrant and overflowing, it drenched the sheet on which she lay.

For a heartbeat or two he paused; then, with renewed ardor, he resumed his assault.  Held in his feathered glory, she was dimly aware of her body. How thin it was, and how her small breasts were crushed by the angel’s muscular chest. As if he read her thoughts, he pulled back and passionately kissed her breasts.

The angel gently took one of her nipples between his lips and began sucking. Suddenly something snapped inside her. She raised her fists and beat at him insanely.

Oh, if only someone—a neighbor—would hear! Come to investigate and help her!

But there was no sound of approaching feet, and the angel continued to pound away as if she were on an anvil and he was determined to beat her into some fabulous shape. Again and again he drove against her, his wings beating with the force of his passion.

“Let me go, you’re hurting me!” she sobbed, striking his shoulders. But her small fists bounced off like grains of sand. As he moved, his pure white wings beat faster and faster, buffeting her with waves of scent. And now she felt again the rise of her despoiler’s excitement, the throbbing of his celestial staff between her frail, bruised thighs.

This time when it was over, the angel released her and lay down beside her. He rested.   It might be for only a few seconds, and she knew she had to act. Groping, her hand found the water glass on the night table and raised it in trembling fingers.    She smashed it against the corner of the table, then drove it at his face, toward unblinking, cerulean eyes that shone with the innocence she had just lost.

Yes, innocence, for even in her rage she suddenly realized the angel loved her and had meant her no harm, that his passionate violation of her body was intended as a gift. And so, because he possessed neither malice nor even the ability to suspect it, the angel did not lift a single finger to stop her.

The broken glass pierced his right eye, turning its pure blue pool into a fountain of gore. Bracing herself, she ground the glass in.   She swung her hips and mounted the stricken angel, gripping the shattered glass in both

hands. She twisted it left, then right, using all her strength. The angel screamed in sweet, reverberant, bell-like tones, and despite her fury, she saw that he was beautiful even in his agony. She watched his mighty hands rise and seize hers.

But he had no strength—could not force her off! Indeed, even as she slashed his cheeks and nose, the angel’s body began to shrink. The majestic wings crumbled and the divinely sculpted muscles withered, exposing slender ribs straining against the flesh. And she? She was growing, filling out! She felt her hips widen and her breasts swell like melons. How full they were, how tender! Why, she was voluptuous now, as glorious as he had been.

Looking triumphantly down at the angel’s ravaged face, she saw it turn into that of her brother. Her brother, who in his own innocence had crept into her bed one night when she was twelve. She laughed. Nor did she stop when the face turned, with lightning rapidity, into the faces of all the men she had sold herself to down through the years. She watched them flicker as countless variations on one dark theme, until they faded and she found herself staring at her own face, at the innocent, untouched child she had once been. Almost, she could have wept—if she had only remembered how.

Then the face was the angel’s again, and she suddenly remembered something. Over the years they had wrestled with each other many times, and always, following her triumph, she forgot him. It was as if she had created him alive from her imagination, over and over again.    The angel’s ruined lips parted in prayer, but she knew she would bless him only with her hate, and feed her emptiness with his beautiful, shining life. From this vulnerable innocence she would renew herself once again, and find the strength to go on.

Finally, when the once radiant face had shriveled and caved in, she knelt upon a pile of fragrant dust which smelled sweeter than jasmine.   Locking her door, she stepped out and walked along the street till she reached her corner.  A couple of the girls were already there, dressed in tight, short skirts and high-heeled boots.

One of them, a fat blonde leaning against the lamppost, turned her painted face as she sauntered up. “A little late, ain’t ya, Angela?  I took your place.”

“I can see that,” Angela said. She reached in her purse, pulled out a cigarette and lit it. Then, because she ran things on this corner, she told the bitch to move her fat ass before she lost it.

Leaning back against the lamppost, Angela exhaled a long stream of smoke. She watched it rise on ghostlike wings toward the night sky, then settled back to wait.

John is a retired English professor from Norfolk State University in Norfolk, Va. He has published three hundred stories in The Speed of Dark, Weird Tales, Whitley Strieber’s Aliens, Galaxy, The Age of Wonders, and elsewhere.  In addition, he has published thirty books, including SF novels such as Speaker of the Shakk and Beyond Those Distant Stars, winner of AllBooks Review Editor’s Choice Award (Mundania Press), and Alien Dreams,

A Senseless Act of Beauty, and  (YA) The Merry-Go-Round Man (Crossroad Press).  MuseItUp Publishing has published several novels, including the first three in the Inspector of the Cross series. Musa Publishing gave his sci-fi time-travel story “Killers” their 2013 Editor’s Top Pick award. Some of John’s books are available as audio books from Audible.com.

Two of John’s major themes are the endless, mind-stretching wonders of the universe and the limitless possibilities of transformation—sexual, cosmic, and otherwise, as portrayed in his short story “Dark Angel”. He is the former Chairman of the Board of the Horror Writers Association and the previous editor of The Rhetorician and Horror Magazine.