From Dumpster to Diva 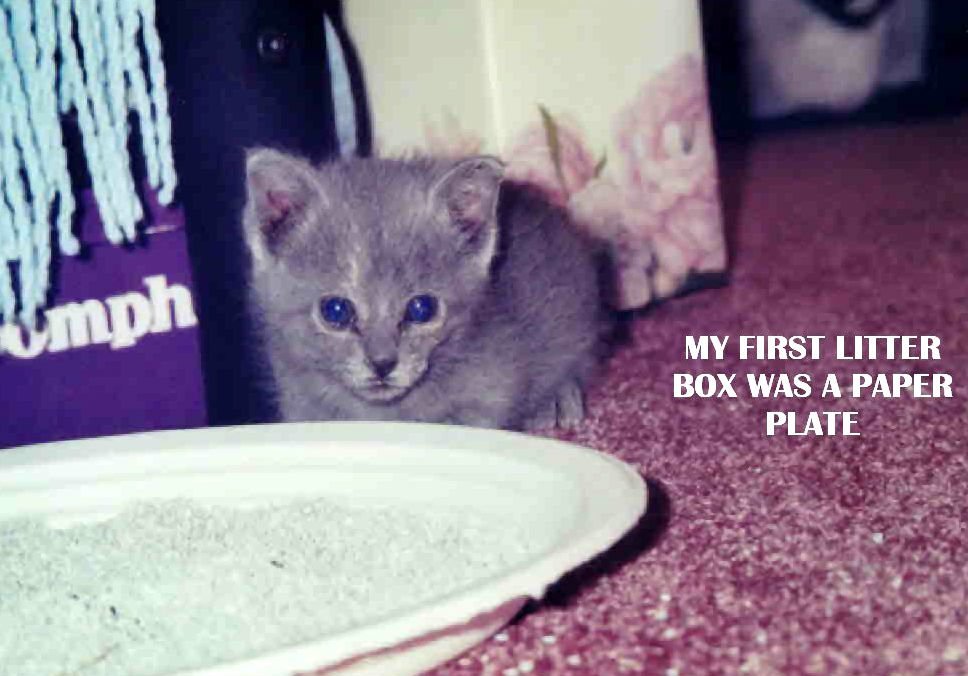 You never know what life will bring, especially if you are of the feline persuasion.

My first memory was of warmth as I cuddled up to birthmother and suckled a protruding teat. All was blackness, though I was much too young to be aware of the difference of light and dark. It was a coziness and comfort with need of nourishment, and it was wonderful.

Many of you know the story so I’ll merely do a quick mention. My ears heard a rumble and all warmth and comfort was gone. My tiny body shifted and stumbled among bits of trash and debris, in search of birthmother. I felt movement, and though so young, I forced my eyes open in hunt of freedom. Above me, the noise grew louder and light grew dim. I cried out, first a mere me yew, not audible to the outside world. As my heart beat rapidly, I drew every bit of strength within my kitty self and stretched my vocal cords to their limits – ME YOW, ME YOW, ME YOW and would not cease the plea for help. I was petrified and the noise filled my ears to the point I thought my ears would puncture from the volume.

Roughness scooped me up and surrounded my form. It held me firmly in its grasp. Wind rushed into open roughness’s open slits and I felt coldness. I shivered and squirmed in fright. Then I heard it. A soft purrish sound that brought me calm; a softness of touch and warmth as strange noises cooed in my ears. Thus began the connection between new mother and I.

Suppose I was never the easiest kitten to raise, nor cat to nurture. There was something left inside of me that would always remain feral. Something wild and untamed, which released itself to the unknown. To bottle feed me was a nightmare, I am sure as I clawed and scratched against the hands which held my milk bottle. Mother later told me she had to wear gloves for I clutched her hands with my sharp nails and would not let go. What caused Mother pain, brought me a feeling of safety and calm.

Interacting with Father was yet another issue, well at least for him. From what I recall, and I am sure you may verify it with Father, I would wrap my kitten body atop his face, getting warmth from his thick mustache and beard. As Mother told it, I would sit on his face, and she feared he would be unable to take a breath. Laughter stopped this from happening. They both saw my actions as hilarious and Father would open his mouth and shoo me away. Not funny falling off someone’s face, but guess I deserved that for my unthinkable actions.

Years passed and I grew into a young cat, yearning for companionship. We had moved from a climate that was warm and sunny year round to one of snow and ice. I huddled in my home, amid down blankets and overstuffed pillows. Spring arrived with an urge to explore and I snuck out into the world to explore the gardens, trees and grassy mounds. That is when it happened, I met a friend, Mr. Jeeters; a black cat with white paws from next door. Seems Mother didn’t take to Mr. Jeeters. She saw us together, snatched me up, brought me back into the house and locked the door. Well! Not much I could do but settle into the windowsill and watch the birds and squirrels.

Changes were taking place and as the days and months passed I found myself growing fatter and fatter. There was squirming in my belly that I’d never experienced and sometimes it hurt; as if I was being kicked from the inside. Whatever could it be? I wasn’t eating anymore than usual. Was I going to die? Were there parasites within my body? Why wasn’t Mother helping me? She kept telling me I was a ‘bad girl’ and I was pregnant. What the heck is pregnant? They say time takes care of everything. Suppose that is truth. I felt pain and knew I had to seek a shelter. The next thing I knew was my body was instructing me to push and push and push. One, two, three, four, five; six times in all these little balls of fur popped out of me. I looked upon them, cleaned them and fell instantly in love. My babies! My kittens! I’d never been happier in my life and purred with contentment. I had never felt such love, not even for Mother. This would be the only time I would ever feel this special love again and perhaps that was for the best. I had other avenues to pursue.

Which brings me to present times. I have found my calling in life; what Mother calls, my purpose. Or as I like to say, my purr-puss. I have found a love for music and knowledge. Who would have thought an old, set in her ways cat would love the spotlight or new people?

It happened one day when I was sitting on the computer table. I heard a strange sound and drew close to Mother. The sound continued and it was pleasing to the ear. Next were voices of what I found to belong to Kenneth Weene and Kerry Hall. They called my name and it excited me. They knew me! Just some cat and they loved me! I ate it up and wanted more, so I sat next to Mother while the voices rattled on and the strange sound, I now know as music, continued to play. I was in Punky Heaven. People liked me and I did not fear them. Not here, not now, not in this place. I was safe and could interact with other humans.

Thus, is the start of my fame as Punky, Radio Cat for It Matters Radio. I am a Diva. I am spoiled from tuna, sardines and kitty treats. And I am in love with life!

Please join me each Sunday at 3PM ET US, beginning in 2016. You can find my schedule @ It Matters Radio!

I also write a newsletter from my litter-box each month, well, with the help of Co-Host of It Matters Radio, Mr. Kenneth Weene. Guess I should mention that Mother, Monica Brinkman, hosts the shows and they are live, on-camera, so I try to behave.

Well, hope you enjoyed my story from Dumpster to Diva! Now back to those treats! Where’s Mother?