I Pledge Allegiance by Kenneth Weene 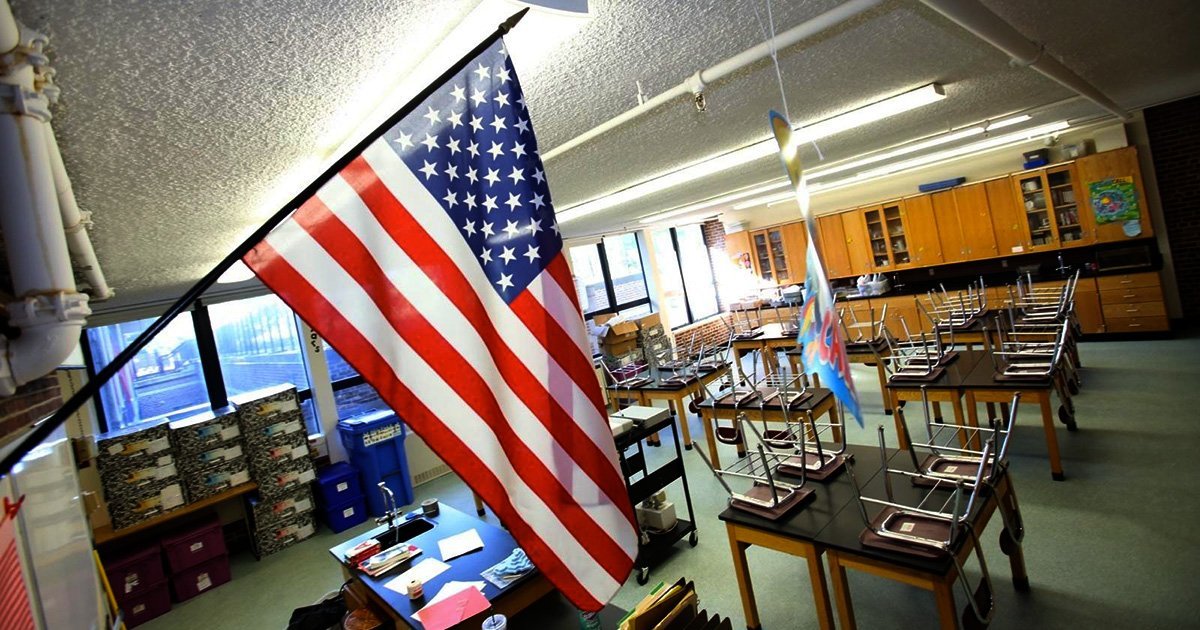 The day before our mothers had brought us to the classroom door. Miss Buckley had greeted us with a smile and questions. “Do you like to color?” Do you like music? Do you—?”

Most of us had nodded, too shy to speak.

“You have to tell me,” this new force in our lives instructed. “When I ask you a question, you must answer. Say ‘Yes, Miss Buckley’ or ‘No, Miss Buckley. Do you understand?”

“Yes, Miss Buckley,” I managed to squeak through my terror.

“Good boy, Kenny.” She patted me on the head, and my educational indoctrination was underway.

The next morning, we stood outside with the older kids until the bell clattered and a teacher opened the door. I knew my mother, like many others, was standing outside the chain link fence watching to make sure—one cannot know of what. My brother was there, ignoring me with a watchful eye from the third-grade line.

We marched single file down the hall, down the stairs, and into the kindergarten. This day, Miss Buckley was not so friendly. Moving with a quiet teacher grace around the room, she made sure each of us found a child-sized chair in the circle. She made do with gestures and gentle shoves, the fewer words the better thus modeling another rule of school life: “Quiet, no talking.”

Overhead a loudspeaker squawked. A tinny voice ­— nothing like the voices on the Sromberg Carlson on which we listened to Baby Snooks and Buster Brown — told us it was Thursday, September some number, and that we should have our books covered by the time we came to school on Monday morning. I had no idea who he was, why he was saying these things, or why books needed covering.

Then that voice announced, “Please stand and face the flag of our country for the Pledge of Allegiance.”

We sat there, not sure what to do, until Miss Buckley stood and gestured for us to do the same. “Put your right hand over your heart and look at the flag,” she instructed.

Most of us had no idea what a right hand was or what she meant by “over your heart.” At least we all knew where the flag was. Forty-eight stars and thirteen stripes, hanging from a short pole, jutting into the classroom above a swath of pictures our teacher had pinned on one wall.

The voice droned on with words I would, over coming weeks, memorize. I pledge allegiance to the Flag of the United States of America and to the Republic for which it stands — one nation, indivisible — with liberty and justice for all.

Every school day for the next ten years, until I went to boarding school in tenth grade, I would repeat that pledge. Nobody ever discussed it. Nobody ever shared its history. Nobody ever questioned its purpose. Most of those days, the pledge was followed by a verse from The Bible, with occasional substitution of a short poem — always by an American author and always extolling the wonder that was us — and then by “The Lord’s Prayer — in Protestant, not Catholic form.

One hundred eighty days a year, the indoctrination continued. The goal, in retrospect, to convince us that we lived in a Christian nation, a Protestant nation, and that we should love, honor, and obey that nation with all our hearts, minds, and souls.

Years later, studying educational history, I realized that my childhood had been rife with indoctrination and propaganda. One reason for that indoctrination was as close as my grandparents’ homes. All four had immigrated to America. For some inexplicable reason, the educators of the late nineteenth century feared that such immigrants would have more loyalty to their old homes than to their new. What a strange notion! Why would they have traveled so many difficult, uncomfortable, and often dangerous miles if they didn’t have a dream of coming to America? Why would they have suffered the indignities of Ellis Island and the struggles to learn a language and find a job in a strange land if they didn’t consider it a better world? Better for themselves and their children.

When Francis Bellamy penned the original Pledge of Allegiance, it had been meant as a statement of love for one’s country. That was 1892, and the Columbian Exposition was about to open in Chicago. Bellamy, a man of the cloth who professed both socialist values and an abiding racism, wanted to give voice to his belief that the American White nation was special—so special as to be properly compared to the Roman Empire. This wondrous American nation was not for all, but those who did belong must love it with unquestioning devotion and pride. Born during the Civil War and a true New York Yankee, it was Bellamy’s dream that every true child of America from the North, South, or West would join in his pledge.

A strong advocate for public education, Bellamy assuredly saw such an affirmation of national love a perfect addition to every school day.

That the Pledge was an integral part of a nationalist propaganda made its alteration during the Cold War all too easy. In 1954, the last year of my public school career, Eisenhower pushed for a change in the pledge’s wording. He wanted congress to add “under God,” which they did. Two years later, “In God we trust,” was made the national motto and added to American currency.

The reason for those changes was simple. Eisenhower was looking for a simple way to demark the difference between the United States and the “Communist” government of the U.S.S.R. Freedom of religion became the touchstone for that difference. Years later, when Ronald Reagan met Mikhail Gorbachev, it was religious freedom to which Reagan turned in his criticism of the absence of rights in the U.S.S.R.

By the time “In God we trust” was made the part of the national currency of thought, I was in boarding school. My first year there I took a European history course taught by Doc Livingston. In a strange and reverse way, Doc reminded me of Miss Buckley. As a teacher, Doc’s goal was to make us question. “History,” he once said to me, “is the dissecting of truth from lies, of reality from propaganda.”

I did well in European History, especially on the essay requirements. The school’s headmaster was surprised. He had thought I was overreaching taking an advanced course. I never told him the secret of my success: Whatever the question question its premises; separate truth from indoctrination.

All those years of saying that pledge (and mouthing the words to The Stars Spangled Banner — no point in making people standing near me suffer — and saluting the flag when it was raised in mornings and taken down in evenings) and I still question our nation’s propaganda.

I do not want to pledge my heart to a country or political system. My mind? Yes, that I can pledge because doing so allows me to take part, to judge, to disagree. But my heart? No. It isn’t that I don’t love my country. I do. I cannot, however, give unquestioning allegiance. Indeed, to do so seems to me to disrespect the authors not only of the Declaration of Independence and the Constitution but also of the Federalist Papers, and all the other arguments and convocations that went into our nation’s framing. It disrespects the process of legislation by which conflicting views are resolved and of our system of law by which the tension of argument is resolved. Worse it contravenes the entire history of a nation that has honored change, indeed that has prided itself on being a beacon for change in the world.

I do not bemoan those hundreds of mornings spent saying the pledge, listening to Biblical verses, and reciting the Lord’s Prayer. I did not suffer those minutes. Perhaps I am even better for them, but I do bemoan a country that cannot recognize that its own propaganda is still propaganda, that saying mantras of patriotism is not the behavior of true patriots. If government is derived from the consent of the governed, that consent must not be automatic but given grudgingly and after careful examination.