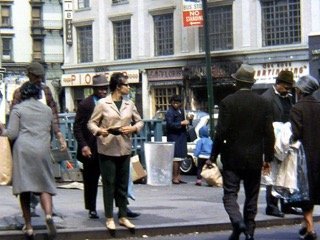 After finishing college, I spent some time in grad school in New York City. Caught in a depressed mood swing, I didn’t want to live in a dorm or share an apartment with other people, so I found a place I could afford at the edge of Harlem. The building in which I lived was rent-controlled and filled with elderly Jewish tenants. Downstairs we had a neighborhood newspaper and candy store much like the one my maternal grandfather had owned when I was little. Dave, the owner, was as weary and worn as my Pa had been, but at least he could walk without a cane and discuss the happenings of the day; he read every one of New York’s dailies.

What Dave couldn’t do was sell me a paper or an egg cream without a commentary on how the neighborhood had gone downhill since he had moved in and bought his business fifty-some years earlier; and that plaint always followed by an appropriate groan of “Oy vey iz mir”.

Across the street, 163rd to be exact, was another little store, this a bodega in which all business—except mine—seemed to be conducted in Spanish. They, too, sold newspapers, ones I couldn’t read beyond the frequent references to Puerto Rico in the headlines. The bodega sold the little cigars I preferred to the Parliaments I got at Dave’s. They also sold bright pink, green, and other vibrantly colored sweets and sodas with contents I had never actually tried so I knew I wouldn’t like.

Swirling around the Jewish and Puerto Rican center of my tiny world was a sea of Blacks. Of course, back then they were called Negros. Mostly, they ignored me and I them except for one time—late at night—when a teen decided to rob me.

“Hand over your money,” he demanded, his hand thrust deep in his pocket.

I complied and handed him the five bucks and thirty-two cents I had in my pocket.

“That’s it,” I answered. “If I had money, do you think I’d live in this part of town? What I don’t understand is why you’re robbing people who live around here. Why don’t you go where people actually have money to steal?”

He thought about that and handed back my four singles, three quarters, four dimes, three nickels, and two pennies. “I guess you need this more than me.”

I handed a buck back to him. “You’ll need subway fare.”

He shoved the bill into his pocket and slouched towards the subway entrance on the corner.

I never saw him again. I wonder if he took my advice.

Jewish, Puerto Rican, or Black, we all shopped at the one grocery store, Sloan’s on Saint Nicholas Ave. It was the only grocery in the neighborhood and the prices seemed reasonable. That was they seemed reasonable until I wanted a piece of meat.

I didn’t do a lot of cooking. Breakfast was dry cereal and coffee. Most days I ate my other meals in the school cafeteria—tasteless but cheap—or in one of the less expensive restaurants I could find along Broadway. Sometimes—to be honest many times—I got fried chicken from this great little storefront on 125th; mine was usually the only white face in the place, but who cared? If I did “cook” a meal, it usually meant hotdogs or warmed canned stew. Once in a while Campbell’s Cream of Mushroom Soup heated with canned tuna and dumped over a piece of toast.

I don’t know why I suddenly wanted steak: just a whim or perhaps my body communicating some subconscious nutritional need. Whatever the reason, I took the coffin-sized elevator down to the entryway, pulled my winter jacket tight against the cold that found its way off the Hudson, waved to Dave as I rounded the corner, and continued half a block to Sloan’s.

The meat department was along the back wall, right side. Packages labeled “steak” filled a small segment of the display case. I picked through.

Why are they green?

I took a pack: “Rump Steak, 1 pound”, brought it to the butcher’s window, and turned my question into words.

“That means it’s ready for cooking,” the “butcher” assured me. “We age our steak here. This color means it’s properly aged.”

I didn’t believe him, but I bought that pound of meat anyway. My curiosity aroused, I was going to do some comparison shopping.

Hopping on the subway, I headed to the Westside, to the world of brownstone buildings and upper-middle incomes. Finding a Sloan’s was easy. I took my brown paper bag with its “rump steak” contents—label removed—to the meat department, found another pound package of rump steak—which was 15 cents a pound more than I had paid on Amsterdam Ave—went to the butcher’s window and asked. “I have this pound of steak I bought someplace else; but when I was on my way home, I realized I needed another pound. I don’t want this girl who’s coming over to think I’m cheap. Anyway, I came in to buy another pound, but there’s something wrong with your meat.”

“There’s nothing wrong with our meat,” the butcher informed me. “We carry the best meat you can get.”

“Oh, but the butcher in the other place said meat should look like this. That it should be properly aged.” I pulled the package of “aged” steak from the bag. “Yours is a different color.”

“Where did you buy this crap?” the butcher demanded. “First, it’s going rotten. I wouldn’t feed it to my dog. And…” He took a careful look, “This ain’t steak. Too veiny and tough. If it were fresh, you might use it for stew. My advice, throw it and buy two new steaks.” He turned away and then threw in an afterthought. “And, hey, kid, not rump. Get yourself a sirloin.”

I thanked him, but I didn’t buy any meat. Instead, I went to a Gristedes and bought myself half a pound of chopped meat. Salisbury would have to do since I’d exhausted my pocketbook.

Back on 163rd St, I stopped at Dave’s to pick up a paper and a candy bar. Munching my Milky Way, I shared the day’s experience.

“That’s why I hate them,” Dave said. “Those coloreds move in and everything goes to shit.”

Something had surely gone to shit, but it wasn’t the Blacks or the Hispanics or the Jews who had caused it. In those days, before sell-by dates and in parts of the city where the less affluent lived, taking advantage of people who had less by selling them food that was on the edge of turning was common practice. No point in pointing that out to Dave.

“You don’t have to tell me,” the corner store owner continued. “I live here. I shop here. I’m getting screwed, too. What can you do? If I could find somebody to sell this place to, I’d get the hell out; but who wants to buy up here? What another Rican without any money? “Oy vey iz mir!”

I didn’t shop at Sloan’s anymore—not for canned goods and certainly not for “properly aged” steak. I went farther downtown and paid the extra that really wasn’t extra at all. But there was one thing I couldn’t figure out. Dave seemed like a smart enough guy. He read the papers and kept abreast of things. Still, he didn’t get it: The bad guys were the greedy management at Sloan’s who were cheating all of us. Not the customers—Black, white, Hispanic—whose poverty and lack of information kept them only a lucky hairsbreadth away from food poisoning.