Spinoza and Me by Kenneth Weene 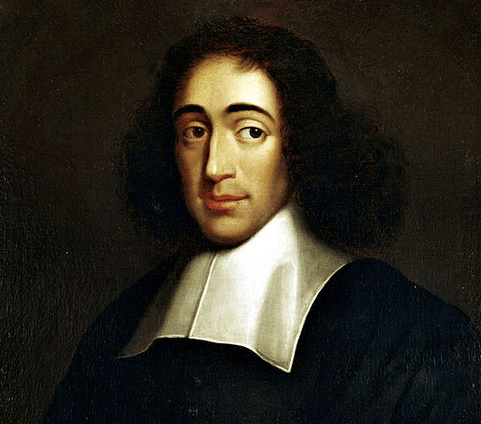 It was Tuesday afternoons, two-fifteen almost every Tuesday for the school year – for my seventh-grade school year. They would leave – dismissed early from school to attend religious instruction. Most, the vast majority of my classmates would leave to learn about God, to learn about faith, to learn about dogma. Almost universally they were Catholics. The city in which I grew up was almost entirely Catholic – half of Irish background and half of Italian ­– but all Catholic and all scheduled for confirmation.

​Off our classmates would go in mass exodus, and we – a small number – would huddle in our respective homerooms while being watched – as questionable minorities must be.

​The remainder of the school day was designated a period for “guidance and moral education.” We were given neither guidance nor moral education. Instead, we huddled in our minority and did homework. My homeroom teacher taught English so we did English homework. Next door was a social studies teacher. His minority worked on geography and memorized facts about our city, Somerville, our county, Middlesex, and our commonwealth, Massachusetts. On the other side of our room was a math teacher; there fractions and equations held sway. Therein lay one of the basic moral lessons of my youth – free will may exist, but free choice does not.

So we, in our suspicious minority status, sat quietly and tried to appear compliant – to appear as a well-disciplined and obedient unity. There was only one problem: we were not a unity. For within our small number there was yet another division, another even smaller minority, a minority of one, of me, a Jew. The Catholics were gone; the Protestants ­– undifferentiated from the vantage point of the Vatican – had become the majority. I, I alone, was left – left to be different. “Hebe,” “Kike,” “Shylock”: I heard all those epithets and more while growing up; but the worst was “Jewww” pronounced with hash J and drawn-out W – pejorative in its correctness. Make no doubt about it; I was the hated “Jewww,” the killer of Christ, wearer of devils’ horns, killer of Christian children and consumer of their blood – ah, blood-libeled matzoth.

​It was not easy being a Jew in that classroom, in that school, in that city. There had been a time when the numbers had been different. If Jews had never been the majority, they had once been a serious minority, but that had changed. Most had moved away – across Boston to Brookline and Newton – on the other end of the transit system. Only the temple remained to let the world know that they, a number of them – us, had once lived there. It was a solid building of granite and cement, a building as substantial as one of the many churches that serviced the rest of the community.

But, inside, within the people, within what survived of the congregation, little substance remained. Commitment had gone with the members – gone to those newer and wealthier communities. A few stragglers, a few professional men whose careers required them to stay, a few old people with neither the means nor the will to move: this was the congregation. And, it was led by a rabbi whose lack of standing was consistent with the temple’s ever diminishing stature.

​Leo Shubow had nothing to recommend him. He wasn’t particularly learned, he lacked charisma, he spoke poorly, and, just to make things worse, he sprayed spittle with every sibilant. There were those who opined that Rabbi Shubow would not even had merited our small congregation were it not for his brother, a well-known and highly respected rabbi who not only led but also dominated one of the most important temples in all of Greater Boston. This successful rabbi had demanded a congregation for his inadequate sibling; presumably, it had been decided that he could do the least harm in our already failed flock.

​My father, one of those professional men who felt that they needed to stay in Somerville, insisted my brother and I attend some religious education. For their part neither of our parents ever went to the temple except for those rare but socially mandatory bar mitzvahs and weddings. Very few adults did go to temple. At most services the required minyan was a last-minute miracle.

​It was probably just as well that almost no adults attended services; Rabbi Shubow had only two topics on which he could comfortably sermonize:

​The first was the need to support the just-born nation of Israel. He would particularly exhort us to give coins to plant trees there. Presumably he thought it would be too political to ask us to help buy weapons for the fledgling Israeli army. Nevertheless, underlying our understanding of the importance of those trees was our dread of the incomprehensible hatred that had become the irresistible tide of the holocaust. Even in our small community, each of us in some way was connected to the dead of Europe and to the precious saved – that minority who had survived the camps – and to those among them who were trying to make a new home – a refuge – for themselves in Eretz Israel.

​His second topic had nothing discernable to do with Israel or Judaism. He was passionate about the threat of icebergs in the North Atlantic. I never learned if he had lost somebody to an iceberg-related sinking or had simply been traumatized as a very small boy by the end of the Titanic. Whatever the reason, he would speak at length – poorly, but at length – about the need for a better warning system to protect sailors.

​His preoccupation seemed somewhat silly to those of us who bothered to think about those icebergs. The world was still reeling from the war. Oceans of blood had been spilled. Even if one were to think of death in the North Atlantic, it made more sense to focus on the torpedoes of the Nazis than on the icebergs breaking away from Greenland and Iceland.

​I would probably have no adult thought of Leo Shubow were it not for a book that he suggested I read. That year – that year of confirmations – I read the book he had suggested. It wasn’t a very sophisticated book, but it did raise an interesting question. Could one be a bad Jew and still be a great Jew? Felix Mendelssohn, the great composer, was one example. Shabbetai Zvi, the false messiah, was another. But, the most important example was Baruch de Spinoza.

​That book didn’t teach me much about Spinoza – the brilliant Sephardic Jew who had been expected to become an important rabbi but who, instead, was perceived by his community as doubting the very existence of God. Still trying to come to grips with the Inquisition that had driven them from Spain and that had killed so many of their fellow religionists, the Sephardic community in Holland was deeply religious, strongly observant, and extremely intellectual. Spinoza’s perceived apostasy was an outrage.

​Ostracized and (very unusually for a Jew) excommunicated, he had made his living as a grinder of lenses, some of the best lenses available in Holland. He had also written brilliantly in his attempts to understand whatever he could of the essential nature of the world and to define mankind’s ethical obligations. Although he had remained outside the Jewish fold, Spinoza had become the spiritual father of the modern age. His simple abode was to become a place of pilgrimage for modern thinkers – perhaps most notably Einstein, who stopped there during his flight from Europe to America – his escape from the Nazis.

​Spinoza ground lenses, at that time one of the purest mathematical activities. Using mathematical formulae, light could be forced into orderly behavior. Einstein went beyond that; he applied mathematics to the understanding of light and to the fundamental physical nature of the world. Shubow was not so brilliant. He could only worry about seeing the physical dangers in the natural world, but he, like Spinoza and Einstein, understood that the physical world could be known – that the dangers inherent in it could be understood and perhaps overcome.

​Precision of mathematical and scientific thinking could give mankind control over nature. It was not necessary to invoke God, nor was it meaningful to think of God as intervening in that nature – given by Him or perhaps more properly synonymous with Him. To appreciate that order, to truly appreciate it, was to love God, to be – in Spinoza’s phrase – intoxicated with God.

​But, mankind is often more intoxicated with itself than with God. It is our nature that we see threat in the mirror of existence and turn on our fellow humans over and over again. Human nature is not so predictable nor so beautiful. It turns us against minorities and thereby against ourselves. We may call it prejudice and hatred, for my part I call it Evil.

​The Inquisition was rooted in Evil as was the Holocaust. There was Evil in that classroom, too. Sitting there on those Tuesday afternoons so acutely aware of being a minority within a minority I was at once both a victim of that Evil and a participant in it.

​There is creation, there is nature, and there is man. For all these there is order, that most divine of all possibilities. Order exists. I revel in that fact and I am too intoxicated with God to think of praying for heavenly intervention.