The Rorschach by Kenneth Weene 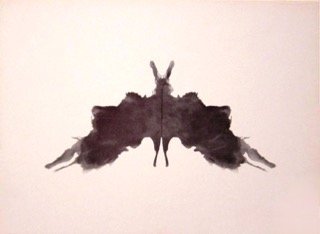 This subject is a thirteen-year-old male,” Professor Hogan, which is not his real name, announced as he passed the test protocols around the seminar table. Having just completed my first year of graduate courses in Psychology, I had wangled my way into the professor’s seminar for advanced students.
He was one of the world’s leading authorities on the Rorschach, that set of ten inkblots that were supposed to give us psychologists an x-ray of the unconscious mind “You are auditing the course,” Jerry, my advisor had explained; “so, while you’ll get to hear and see everything, you aren’t supposed to take part in the discussions. Dr. Hogan is ambivalent about your being there and the other students definitely don’t want you.”

I knew that Jerry had spent a lot of his capital on getting me permission to audit that seminar, and he didn’t even know why it was so important to me. I hadn’t told him about that psychological years earlier. In the throes of anxiety and hysteria, I had sought help. Early in the process had come a full psych workup that included those inkblots.

My responses still bothered me. I wanted to know what they had meant. I wanted to know how to read my own psychological x-ray. It was the sixth of our once-a-week meetings. Each session had been the same. The professor had identified a “subject” by age and sex and nothing more passed around the protocols and asked the class to discuss their findings.

The first go around the table would be scoring the protocols. That itself was an arcane process. Then would come the inevitable question, “So what is the subject’s diagnosis?” That would lead to another round of responses.

Only then could there be a discussion of the subject’s psyche, of the conflicts and thoughts that the students might impute to them. As various suggestions were made, the world-renowned scholar would shake his head and explain once again that the Rorschach was not some kind of magic tool. “If you want to know the hidden parts of a person, you might as well use Tarot Cards,” he told us more than once. “Just stick with the scoring system and you can get an accurate diagnosis.”

That was his approach: People were subjects; what they shared was reduced to scores, and the goal was a diagnosis. I soon realized that the goal of the course was to disabuse us of any notion of the unconscious or of psychodynamics. This was, after all, a behaviorist program with little room for Freud or his ilk.

Even as I had listened to what Dr. Hogan had to say, I wanted to argue with him. I knew that he was, for all his fame, missing something. Perhaps it was lucky for me that as an auditor I was not asked to take part in the discussions. While other students were called on in turn, I was restricted to jotting down my thoughts and waiting to be called on. That call seldom came.

We went over the young teen’s protocol. “Okay, what is your diagnosis?” the teacher asked.  Nobody had a clear idea, but that didn’t stop them from throwing their diagnostic hunches onto the table. “Depression.” “Schizoid personality.” “Simple Schizophrenia.” “Conduct Disorder.”  Oh, they made a lovely list.

I had written myself a note. “I don’t know what the diag. is, but this kid is in trouble. He’s going to end badly. Maybe suicide, but more likely an accident. He’s looking to take risks, trying to prove that he can handle things on his own.”

Paul, one of the other students who was finishing his doctoral dissertation, looked at my note, shook his head, and whispered, “And you got all that from this kid’s Rorschach?”

​“Yes,” I whispered back. “I’d love to know about what happened to him.”

Ignoring us, Dr. Hogan announced, “You’re all wrong. This is a normal kid. His family lived next door to me when I was in Boston, and they let me use him as a subject in my research. I gave you this protocol so you’d understand that while the Rorschach is interesting and certainly has allowed me to do some research, it really doesn’t tell us much about the subjects we test.”

“What happened to him?” I asked. The look the professor gave me made me sorry for my temerity, but I had to know. Dr. Hogan had been in Boston many years earlier; now he was teaching here in the Midwest. Did he know what had happened to his neighbor?

Dr. Hogan probably would have ignored me, but Paul was intrigued by my question—or perhaps it was by my diagnostic note—and he added his voice to mine. “I’m just wondering if we can extrapolate backward and get some idea how some of these percepts might have predicted his future,” Paul said. “I know we might do as well with Tarot Cards, but it seems like—”

“Actually, it’s a sad story,” our mentor began. “Butch died. He was murdered when he was eighteen. It was a terrible thing. He and a friend had hitchhiked across the country. When they got to Oklahoma…” He took a deep breath. “They found his body tied to a stake in the middle of a field. He had been burned to death.”

A collective gasp circled the room. Paul bent close to my ear and whispered, “How did you know?” I didn’t answer him. I was busy thinking about Butch. I never told Dr. Hogan or anybody else in that room, but I had also known the boy. He had been a camper at the summer camp that my parents operated in Maine. It had to be the same kid because how many kids could there have been from greater Boston who had been murdered that way?

I didn’t have much to do with Butch that summer in Maine. As a junior counselor, I had campers to look after, and Butch was older than my group. There was, however, one day on which he and I had interacted. It was the last day of the camp season. Most of the kids had boarded the busses that would take them back to the big cities from which they came. A few were picked up by their parents, typically because they would be going on a short family holiday before school began.

Butch was supposed to be picked up that morning. When lunchtime came, he was still waiting. A call was made. “Oh, we forgot,” was Butch’s mother’s response. “I’ll call my husband; we should be there in three or four hours.”

Butch took the news in stride. “You’ll have to amuse yourself,” the head counselor told him. “Okay.” Off Butch went to do just that.

In mid-afternoon, I was at the waterfront helping to haul in the docks and store them for the winter. Butch had found a piece of plywood and was using it as a very tippy raft which he polled about near the shoreline. I took a few minutes to ask how he was doing.

“I’m playing Tom Sawyer,” he answered. “The trick is to keep from falling off.”

“It must be a pain having to wait this way,” I said.

I expressed surprise that his folks had forgotten to come that morning. No other kid had ever been forgotten that way. Of course, I didn’t say that to Butch.

My folks know I can handle myself,” he told me. “They’ll show up. They always do. It’s no big deal.”

I understood two things. The first was that it was a big deal. Being forgotten by one’s parents is a very big deal. The second was that in Butch’s family talking about his parents’ foibles and failures was verboten. The rule was, “Keep a stiff upper lip and amuse yourself.”

At the time I didn’t really understand the mental health implications of that day. I, like Dr. Hogan, saw Butch as resilient and healthy. I even envied him a bit; after all, he could deal with adversity so much better than most people.

Years later a new concept had entered by an understanding of human behavior. Repression is usually talked about as some kind of mysterious process in which unacceptable thoughts are put away, pushed into an unconscious realm. From a psychodynamic point of view, repression is the center of neurosis.

Of course, for Freudians and the like, that repressed material is about strange ideas like wanting to kill your father and marry your mother. But Butch had taught me something years earlier about repression. Repression is what we are not allowed to talk about. We bury that material because we are told to.

​In Butch’s case what was to be buried was his need to be noticed and remembered and his anger and disappointment when he was not. Years later, he would still be playing on a very tippy raft. The trick would be staying afloat in the face of danger. That would justify the pain. That would make it clear that he was what he was supposed to be, resilient and healthy.

​​We never mentioned Butch again, and I never ever talked about my own responses to the Rorschach. Let’s just say that repression is often an important part of appearing mentally healthy and of success in graduate school.